How Patti Smith Saved My Teeth

On Twitter on Friday, the wonderful writer Elizabeth Hand posted this link  to Patti Smith reading her poetry, in honor of National Poetry Month. I responded that I adored Patti Smith and she saved my teeth, and Ms. Hand suggested I write about it. And she's right, because it really is a story worth telling. Maybe I can save somebody else's teeth by passing it along. First I'll say I'm a longtime fan of Patti Smith. A friend gave me copies of Easter and Horses when I turned thirteen, and I wore out the grooves on both records before replacing them on cassette, then CD. I've seen her rip the strings off her guitar one at a time on stage, one of the punkest moves I've ever witnessed. I've seen her turn mellow crowds riotous, and vice versa. So when my band,  the Stalking Horses, was chosen to showcase at the final Rockrgrl Conference in Seattle,  and it was announced that the speakers would include Johnette Napolitano, Bonnie Raitt, Ann Wilson, June Millington from Fanny, AND Patti (on the 30th anniversary of Horses), I was over the moon.

The dialogue between Bonnie Raitt & Ann Wilson was excellent, but Patti's speech could have been written just for me. Here are the things she said that day:

1)   You only get one set of teeth. Brush, floss, and go to the dentist, or you'll regret it later. (I think she had just had some massive dentistry.)

She said other stuff, like how we should all watch Carnivale, and write to HBO and beg them to keep it on the air, and, y'know, some stuff about art and music and her life, but those other items are the ones I remember most clearly.

(To my parents: if you're reading this, kindly stop now)

At the time of this conference, I was still trying to make full time music work. I was making enough money to pay my bills, barely, with nothing to put aside. My second album had just been released.  I had toured all over the country, mostly playing colleges and festivals. I made some decent money on tour, but then things happened, like when my van broke down in northernmost Wisconsin, clearly in shock over the sixty degree temperature difference between Dallas and Superior, and all of the profits went into fixing it.

I was living on a street namechecked in the first episode of The Wire.  I had emergency health insurance, but it didn't cover dental, and I hadn't been to a dentist in seven or eight years. I brushed and flossed religiously, but I couldn't justify the cost of a dental visit, and really my teeth had to be alright, because they didn't hurt, and anyway a dentist would only yell at me for not having gone in so long, and I wasn't in a mood to be shamed, and what if there was a cavity? My childhood relationship with dentists was a bad one, filled with extractions and frenectomies and braces and braces again. Dentists HURT, and really my teeth were fine. Except for that one spot where I would hit the ceiling if my toothbrush touched it wrong, but other than that…

I don't know why Patti's permission was the thing that worked, the thing that got me back in a dentist's chair, where I discovered that they have new techniques that hurt less, and they didn't shame me, and the sore spot was a place where my gum had receded, but they could patch it.

Her second piece of advice was related. She said it anecdotally. I paraphrase: "Young people always come to me and say, 'Patti, I've applied for every grant and been turned down. I don't have enough money to feed myself or pay my rent.' And I say, 'Get a job.' There is no shame in a day job.  It won't make you less of an artist. It may even make you a better artist, because you'll be able to concentrate better on your art instead of how to pay for your next meal."

Both of those things translate into the need to take care of yourself, body and mind. She was right that we only get one set of teeth. We only get one body too, which is easy to neglect when you're young and desperate and determined to survive on art or music or writing.  I remember an entire northeast tour with a lower respiratory infection, burning with fever, breath rattling between the lines of the songs. I went into a pharmacy in Northampton and begged for something to sooth my throat. They gave me Echinacea drops and a natural cough syrup chunky with chopped up cherries and I think maybe bees, but what I needed was antibiotics. I didn't get them until the end of the tour, and only then because the head of my label begged her own doctor to see me for free and load me up with antibiotic samples.  That was how it worked over and over: I would think I was getting ahead, and then something would happen to put me behind again. It wore on me. 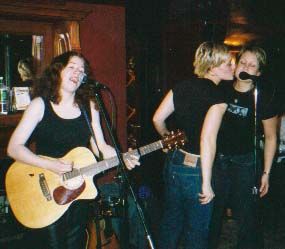 I was so sick, Meghan Cary and Brenda White were actually singing half my songs for me.

Not long after the Rockrgrl conference, a friend of mine told me she had started a job at an agency that worked with people with disabilities, "and there are thirteen people in bands on the first floor alone." She said they were good people to work for, and that they did good, worthwhile work. She was right, and I'm still working there. It's a job I love and I believe in. It's a job where I can live in a house I love,  and repair my car when it needs work, and go to the doctor and the dentist, all of which are things that I am very grateful for and appreciate even more for having gone without them   (by choice – I recognize my privilege) for so long. I should also note that I know not every day job is a job to love. My point (and hers, I think) is that if you are ignoring your health and denying legitimate needs for the sake of being able to say you are a full time artist/writer/musician, you may find, as I did, that there is great relief in acknowledging that a job is not a defeat.

I was very proud to be able to say I was a full time musician. I miss that sometimes. But now I don't have to supplement the gigs I love with the gigs I hated, where cappuccino machines went off every time I opened my mouth to sing. I can play the shows I want to play. I can take my time with making my fourth album (almost done), and take time from music to concentrate on my fiction now that it's going so well. I am a happier, healthier, less anxious person.

Much later on the night of Patti's speech, after a day of panels and a long night of showcases, I found myself alone in the hotel elevator with her. I wanted to say something to her, about how I adored her music and her speech had been good, but she looked ragged, exhausted, unreachable. I didn't want to intrude. And really, I hadn't yet internalized the things she had said that day. I hadn't quite made either decision, dentist or day job, hadn't quite acknowledged she was right.

So now I acknowledge:

Thank you for the wise things you said that day, and for the difference they've made in my life. I am a musician, a fiction writer, an advocate for people with epilepsy. It's okay to be all those things.  I pass your advice along, often: there's no shame in a day job.  Take care of your teeth. You can do those things and still make art.