"Where Oaken Hearts Do Gather" won the Nebula!

On Saturday night, my story “Where Oaken Hearts Do Gather” won the Nebula Award for best short story. This was my fourth Nebula win —and my third consecutive, in three different categories!— but my first for short story. The ceremony and the conference were online, also for the third year in a row. The Nebula is given by the members of the Science Fiction and Fantasy Writers Association— my fellow writers, and the ballot is always full of wonderful work.

As someone who has now accepted three Nebulas and a Hugo (the Hugos were in person, but I had an asymptomatic positive Covid test that week and stayed home) from this chair in my library, I can say there’s something weird about accepting an award live online. I’m a performer; I know how to channel energy. And yet, when they say my name, and the adrenaline hits while I’m trying to find the buttons to hit “accept promotion to speaker” and also remember to turn on my camera and mic, and also try to keep the dogs from barking as they feed off my excitement, there’s nowhere for the excitement to go. I can’t see other faces, so my excitement bounces off the computer and hits me square, telling me I should speed up instead of take a breath.

This time there were three people in the next room, and the delay was only a few seconds, so they heard me whoop and came running. They stopped in the doorway, tried to shush the dogs, and tried not to make any noise while I gave my hurried and overexcited speech. When I finished, they whooped before the feed had cut off, and I whipped my head around, and apparently the result on the award’s YouTube feed sounded like I had been murdered by a cat. I don’t have a cat.

And also, of course, the truth is, I was excited. It’s an honor, and not something I will ever get used to. I have the very first Nebula anthology on my shelf, where Damon Knight explains the founding of SFWA and the choice of the award, based on a sketch by Kate Wilhelm. “Each consists of a spiral nebula made of metallic glitter, and a specimen of rock crystal, both embedded in a block of clear Lucite.” 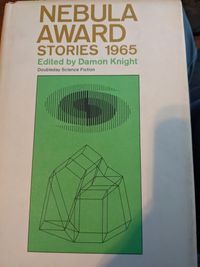 There are now three of those beautiful things on my shelf, each one different, and a fourth on its way. They are external validation in a world where that is sometimes a hard thing to get. We write these things, and edit them, and send them out into the world hoping that someone will read them, but we don't always get to know when that's the case. I know how lucky I am. 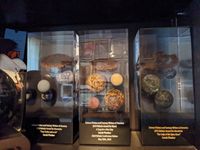 And the thing is, I grew up reading those Nebula anthologies, and other SF anthologies and collections, and even though I am now ten years into this career, there is still a pinch-me-I’m-dreaming quality to this for me. To be on a list forever linked with stories like “Love is the Plan the Plan is Death” and “The Day Before the Revolution,” as someone who grew up reading those stories, is an impossible honor.

A couple of people have asked me for the text and the list I gave in my speech, so here it is, in its more coherent and less breathless form, without me cutting parts as I went. It starts with thank yous to SFWA members, Zu, my family, my Sparklepony critique group, my agent Kim-Mei Kirtland, Uncanny Magazine, and the other finalists, Jose Pablo Iriarte, Alix Harrow, Suzan Palumbo, John Wiswell, Sam Miller, for their excellent stories – I always assume I will not win, because I know the quality of the rest of the ballot.

Winning the Nebula for short story is really special to me because, at heart, I love short stories. Since I’m sitting here in my library accepting this award, I can demonstrate that. Those shelves over there? First of all, they’re doubled up with books behind the books. Those are the anthologies. You can see all of the Dozois Years’ Bests, and Strahan, and Horton, and John Joseph Adams, and Datlow and Windling, and Guran. You can see anthologies edited by Nisi Shawl and Bill Campbell and Judith Merrill and those VanderMeer Big Books of. Lisa Yazsek, Cramer & Hartwell. Best of F & SFs,  Twelve Tomorrows, Women of Wonder. Not pictured? Countless copies of F & SF and Asimov’s and other magazines. 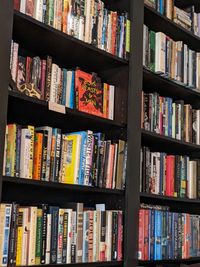 These books behind me? A lot of these are collections too, containing stories both famous and near-forgotten. That shelf there? That’s all Le Guin. Here’s Delany’s Driftglass and Distant Stars. And Nino Cipri and Jeff Ford and Ted Chiang and Molly Gloss and Sheree Renee Thomas and Kij Johnson and Alaya Dawn Johnson and Tenea D. Johnson and Shirley Jackson and Isabel Yap and NK Jemisin and Michael Bishop and Connie Willis and Andy Duncan and Ken Liu and Richard Butner and Caroline Yoachim and Tina Connolly and Charlie Jane Anders and Karen Joy Fowler and Kelly Link and Christopher Rowe and Kit Reed and Cordwainer Smith and Theodore Sturgeon and Tiptree and Elwin Cotman and AC Wise and Kiini Ibura Salaam and Miriam Allen De Ford and John Crowley and Jonathan Carroll and Malka Older and Sam Miller and Jane Yolen and Kay Chronister and if I’m reading these off a list, I made that list off the top of my head even though I could point to them, because I know exactly where they are on the shelf, because these are the things I pull out when I want to challenge myself again to push myself to my limits: the quick hit of a brilliant short story will never cease to inspire me.

And you? I look forward to reading your work too.

I love short stories. Thank you for this honor.